This painting, Fair Weather of Man Ray, which the artist said was the culmination of his Surrealist work, is said by the Philadelphia Museum of Art to contain, as a possibility, a self-portrait in the central figure.

The fragility and poise and the gender-ambiguity of the figure dressed in harlequin are lovely.

This painting dates to 1940 and in that year, Man Ray left France for his native country, the United States.

The single candle at Harlequin’s apex protected by glass is also lovely for its fragility to denote a single intelligence staying alight during a fraught time.

On some days, I think that both figures may represent the artist.

To the right of the door which cuts the image in half is the artist in France.  On the left is the artist readying to leave for the United States.

On the ‘French’ side of the painting is a silhouette of an amatory couple in front of a painting or a mirror.

They are surmounted  by large, gorgeously coloured and amorous snarlers.  The well known difficulties of love?

The door facing the ‘French’ side of the painting has a man with a harlequin hat, in apparent anguish, separated from a woman leaning upwards towards him.

Also on that side is a billiard table with a golden pathway from one side to the other.

Fair Weather contains an indication of the destructive  war which began in 1939 in Europe.

The egg Harlequin has cracked is bleeding blood.  Some has dribbled over to Harlequin’s foot.

On the ‘American’ side of this painting are a book with symbols; and a brick wall with missing bricks which would invite escape but for two tridents placed dangerously in front.

I don’t know why the tridents.  They may be Neptune’s for the ocean Man Ray was about to re-cross in 1940 to leave France for his native shores.

The tridents may also evoke the trident (trishul) of Shiva because the Surrealists were master appropriators of any  symbol they found useful or beautiful.

Shiva: he who creates, transforms and protects the universe. Something which the Surrealists tried also to do in pale, human imitation.

But why go to India?

There is also this:  a North American portrait from the country’s imagined history painted by an artist from heartland Iowa.

The great fame and notoriety of this painting may have been known to Man Ray as early as 1940.  Man Ray may be evoking simply his return to his native country with all that this evoked of the loss of the French way of life. 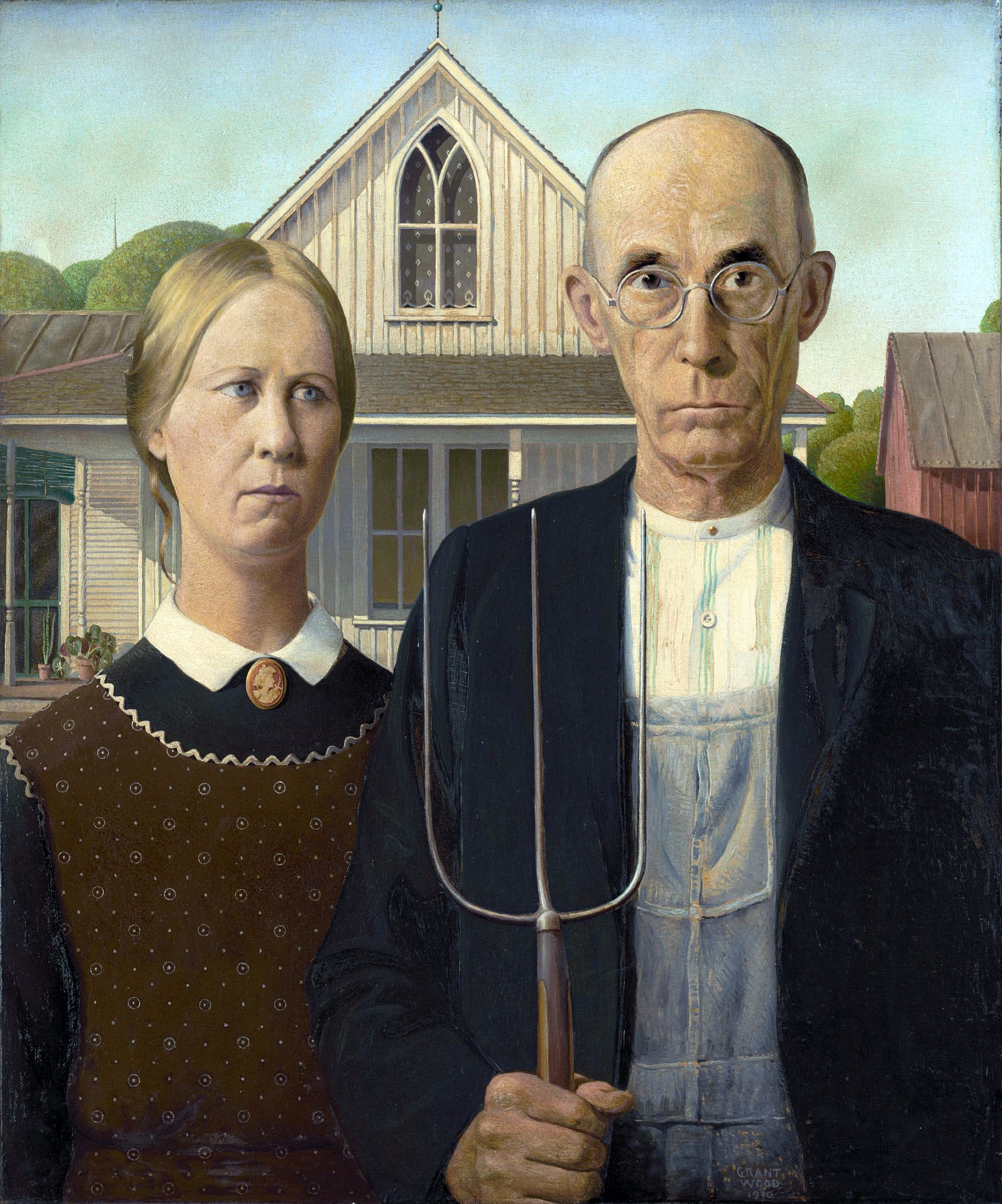 On some days I think the figure on the right of this painting is not the artist but France. Her weather vane is perfectly balanced.

North American life is often surreal: its violence, its gargantuan consumptions, its bizarre politics; on and on.

But the notion of the surreal seems alien to the North American way of thinking: an insouciant European heresy.

The artist, returning from France to the United States in 1940, left this painting in France.

He later reclaimed it and kept this painting his whole life.

This does not surprise because this poised, balanced, haunting painting, somewhat enigmatic from our point of view, was undoubtedly heavily freighted with meaning for the artist.

I think of how fortunate are generations of North Americans who have not seen their country destroyed in war since the Civil War.

How fortunate their artists and artisans.

But it is, perhaps, more likely that Man Ray’s title referred to France which was the ground of his creativity.