Willie Cole‘s imagery is about

the creation of our every-day world by the manufacture of the things we use;

things useful and necessary and even beautiful;

and the claim to sanctity of the high human cost of the manufacture of some of these products.

Pablo Neruda‘s poem about the making of poetry can be taken as a metaphor for this process of manufacture.

He died in circumstances which may or may not be ambiguous.

People lined the roadway as his cortege passed, declaiming his poetry.  They had been banned from attending.

It emerges from water covered with drops,

is wrinkled, all in a heap.

Hanging out the laundry to dry (The Gennevilliers Plain), 1875, oil on canvas, and detail.

Many irons had a cavity and a covering.  Hot coals would be placed in that cavity.  A lot of work.

Slavery and post-Civil War Reconstruction created huge cotton wealth, of course, for the United States and for the United Kingdom to whom a significant portion of cotton was exported.

Slaves branded with irons – something so dark – transformed into the brightest white, ready for washing and ironing. ‘Pure innocence returns out of the swirl’ as the poet says below.

The metal base of an iron, the ‘sole plate’ has also been a subject for the artist: he has  made art which addreses the iron’s piece parts standing in for soul and body.

Willie Cole has also taken an interest in the images conjured up by the vent holes in such sole plates and has suggested what images these create for him.

Vent holes. These conjure entry ways deep into our earth and into our minds. 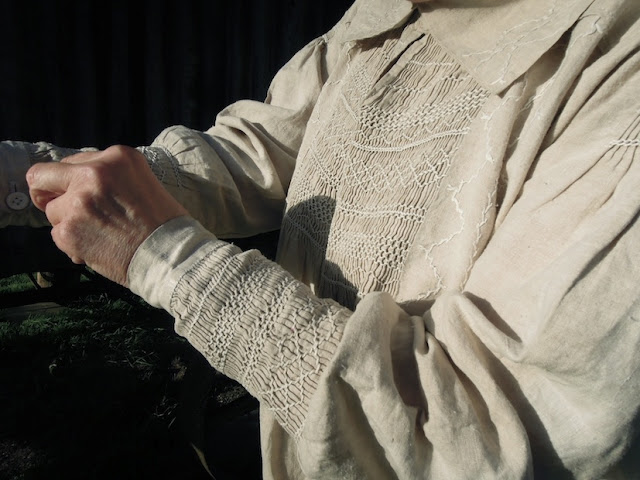 A photograph posted by Elizabeth Baer (died 2016), a British antiquarian textile dealer. who taught us so many things in her appreciation for and care of textiles.

Every day, hands are creating the world,

fire is married to steel,

Grant Wood, 1891-1941, American.  Art Institute of Chicago from whose website this photo

8 thoughts on “The soapy swirl, the iron, and the doves which are born”