The first capture of my heart in museums came when, a child, I began to look at men in frames on walls and enclosed in vitrines.

Mostly men because there were few women in any state of being in museums when I was young. (The Virgin Mary was the most represented figure in ‘Western’ art until modern times).

Mysterious, these images of men hanging there.

What did they do to deserve this kind of forever immobility?  Where were the(their) women?

I would talk to them.  I still do, sometimes, in my continuing odyssey through museums:  they listen but they don’t speak. All they have to say is there within the frame.

What there is, best of all, is the trust of each artist that their depiction of the spoor and track of our species, image after image, will survive the forgetfulness of centuries.

A good story, even if the story grossly overrepresents – if less so today – rich, powerful, well-connected men:  their histories, families, tastes, concerns.

And, of course, before 1900, often the gorgeous textiles and colours.  Hats and berets, feathers, garters, waistcoats, cravats, ties, and shoes to die for.

Loaned to the Metropolitan Museum of Art in 2019 by the Museum of Fine Arts, Boston whose photograph this is.

The red-heeled shoe is thought to have been created by ‘Monsieur’, Louis XIV’s bisexual, cross-dressing brother, Philippe I, Duc Duc of Orléans (1640-1701)

Men usually on their best behaviours and usually all spruced up. Men as quiet as quiet.

How could I not love these men in frames and vitrines?

Listening to us from down the walls and the generations while we put ourselves in their frames and snap our selfies as though we were among friends and family.

Views of a fragmentary Colossal Head of a Youth, Greek, Hellenistic period, 2nd century BCE.  Discovered at Pergamon in 1879 and loaned in 2016 by the Staatliche Museen zu Berlin to the Metropolitan Museum of Art, NY.

Views of a A tsesah crest:  a symbol of the leadership of a fon of the Bamileke of the west and northwest Cameroon. Metropolitan Museum of Art, NY

The museum explains that the fon is a sacred chief of a kingdom who also has civil, military and territorial power. 18th century.  Wood with extensive repair made with metal supports.

Glass cup in the form of an African.  Roman, mold-blown, second half of the 1st century ACE.  Metropolitan Museum of Art, NY

Portrait of a Young Gentleman, 1474, oil on wood panel.

Attributed to the Master of the Magdalene Legend, active 1480-1520, Netherlandish.  Philadelphia Art Museum

An informal working study hung up with a single cord.

Portrait of a Man, and detail, oil on canvas.

Portrait of a Man, and detail, tempera and oil on wood.

His lyre is in his hands and the dog Cerberus is becalmed.

Wilhelm Danielsz van Tetrode, 1525-1580, Netherlandish.  On loan by the Quentin Foundation, London to the Metropolitan Museum of Art in 2018

Portrait of a Man, and detail, possibly of an Architect or a Geographer,  1597, oil on copper.

Thought to be one of the sons, wrapped in swaddling clothes, of Cosimo I de Medici and Eleonora de Toledo

Johan Gregor van der Schardt,  c. 1530-1581, Netherlandish.  Loaned by the Rijksmuseum, Amsterdam to the Metropolitan Museum of Art in 2018

Portrait of a Gentleman Seated before A Landscape, 1535-37, oil on canvas.

The most skilled of the followers of Caravaggio (Michelangelo Merisi da Caravaggio) 1571-1610. Italian whose immense talent was cut off by death at the age of 36.

Velasquez (Diego de Velazquez, 1599-1660, Spanish).  Metropolitan Museum of Art, NY on loan from the Spanish Society of the Americas in 2018

An unfinished painting (detail):  Portrait of a Man Receiving a Letter from a Boy, 1660, oil on panel.

Attributed to Gonzalez Coques, active 1614/18-1684, Flemish.  On loan from the Orsay Collection, London, Paris to the National Gallery of Art in 2017

A little boy wearing the insignia (livery) of a cardinal

The Museum notes that, while in the eighteenth century bubbles were an allusion to the transience of life, the artist, who painted two later versions, may have created this for the pleasure.

Joseph Ducreux, 1735-1802.  Spencer Museum of Art, the University of Kansas on display in 2017 at the National Gallery of Art, Washington, DC

On loan from UCL Culture, London to the Metropolitan Museum of Art, NY in 2018.

The Unitarian philosopher’s skeleton, except his head, is encased in this clothing.  He sits, glassed off,  at an entrance of University College, London.

Attributed to Sri Ram Pal mid-19th century.  Peabody Essex Museum, Salem, MA on loan to the Metropolitan Museum in 2018.  This was a wealthy Bengali merchant based in Calcutta.

He sent this representation of himself to his partners in Boston.

Thought to have been painted by Madame Gustave Hequet, active  c. 1845-65,  Metropolitan Museum of Art, NY

The museum notes that this was bought at the estate sale of the possessions of Gustave Hequet. 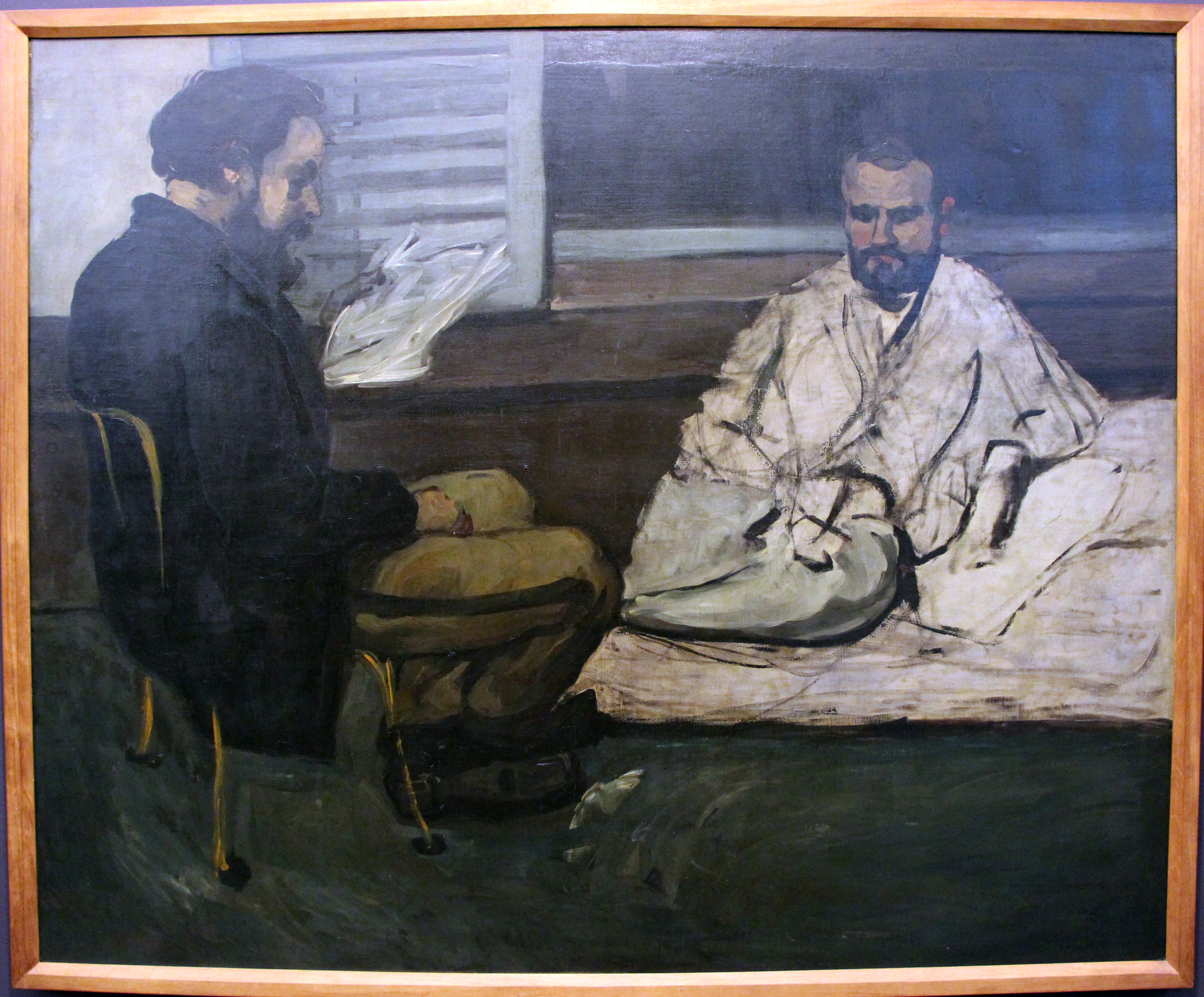 This painting is unfinished.  War broke out between France and Prussia in 1870 and Cezanne fled Paris.

In this painting, a young Paul Alexis is reading his own work to Emile Zola who had encouraged the younger man to come to Paris and take part in the intellectual and aesthetic ferment which Zola supported and which was centered on the work of the group later labelled as Impressionists.

The artist staged this portrait in his studio with fabric and artifacts he brought back from a trip to the Near East. The name of the painting was the name of unpaid irregulars who fought for the Ottoman Turks for plunder.  Though not dressed up in this finery.

The museum notes that this is two separate compositions:  the young man at the top and two ladies sitting at the bottom.  The skirt of one of them is still visible at the bottom of the screen.  The canvas was left unfinished at the time of the artist’s premature death.

Staged and painted in Tunis with the co-operation of a local by by Henri Regnault,  1843-1871, French. The Corcoran Collection of The National Gallery of Art, Washington, DC. 2014

The subject was the son of the Emperor Teodros (1818-1868) of Ethiopia who took his own life rather than be taken by Robert Napier’s punitive expeditionary force who entered Ethiopia to rescue British hostages.

Alemayehu Teodros was raised in Great Britain,  He died young and is buried in a communal grave outside St. George’s Chapel, Windsor.

All appeals that he be returned for reburial in Ethiopia have so far been denied.  The latest reason given is that the difficulty of identifying particular bones in a communal grave.

The museum notes that Claude Monet always kept this painting of a son who predeceased him.

The Biglin brothers on the Schuylkill River, one of two rivers on which sits Philadelphia

The Champion Single Sculls (Max Schmitt in a Single Scull), 1871, oil on canvas, and detail.

The  Moorish Chief (originally The Guardian of the Seraglio), 1878; oil on panel; believed to have been shown at the Salon in that year.

Garshin wrote short stories.  He was a progressive and his interest lay with pacificism, beauty and the prevalence and avoidance of evil.

Mental illness ran in the writer’s family. Garshin took his life not long after the suicides of his father and brother.

Georges Seurat, 1859-1891. The Barnes Foundation, Philadelphia from a reproduction on display at the Barnes, Autumn 2016

Gambetta Proclaiming the Republic of France (the 3rd Republic) from ‘The Siege and Commune of Paris’ by E.B. Washburne in Scribner’s Magazine, 1887, oil on canvas board.

The work of the wife of the painter Thomas Eakins.

The Zouave, 1888, reed and quill pen and ink over graphite on paper.