The American William Arnett’s interest in ‘folk’ art was piqued by exhibitions of such art in the early 1980s.  This was work of both black and white populations in the Appalachians and the Deep South of the United States.

Such art, labelled ‘self-taught’, ‘folk’ and ‘outsider’ art, has been collected institutionally and displayed in its own separate enclosures for some decades.

William Arnett began travelling through the South in the mid-1980s.

Finding artists in rural hamlets in Alabama, Mississippi, Tennessee, Georgia and Florida, he paid many retainers, he provided cash and he bought their work when he could.

William Arnett’s view is that this work should be held in the same esteem as that of mainstream American artists.

Annie E. Pettway moved with her husband to the former Pettway Plantation in Gees Bend, Alabama.

She spent her life working in the fields and raising her nine children.  She made quilts and taught her progeny how to do this.  Her family still live in the homestead she and her husband established 75 years ago.

In 2010 William Arnett established the Souls Grown Deep Foundation to institutionalize the collection of almost 1200 works and to preserve, promote and distribute them.

Locked Up Their Minds, 1972, commercial paint on plywood.

The artist is commenting on what he considered to be the obtuseness of some viewers of his art to whom he had had to provide explanation.

He documented this work and in 2012, the Foundation donated its archive of more than 13,000 documents to the University of North Carolina’s Southern Folklife Collection.

In 2014, the Foundation began a program to transfer the majority of its works to major museums throughout the United States by gift and purchase.

To date the Foundation reports the acquisition by 20 museums of 390 works by 108 artists.  (The Museum of Modern Art, NY is not in this group).

It will be interesting to see if further acquisitions will be made by museums, from what source(s) and what integrative (or not) exhibitions museums propose in the future.

Here is a sample of work now in the collection of the Metropolitan Museum, NY, the Philadelphia Art Museum, the Phillips Collection, Washington DC, and the Whitney Museum of (North) American Art, NY.

Both the Met and the Philadelphia Art Museums held exhibitions in 2019 of some of their new acquisitions.

2019 marked the 400th anniversary of the implantation of enslaved Africans on the North American continent.

This work is that of individuals in isolated rural communities, separated from each other and using the materials of their environment. A few live in urban environments:  Miami, Atlanta.

Smoke-Filled Sky (You Can Burn a Man’s House But Not His Dreams, 1990, charred wood, industrial sealing compound, and paint, mounted on wood. 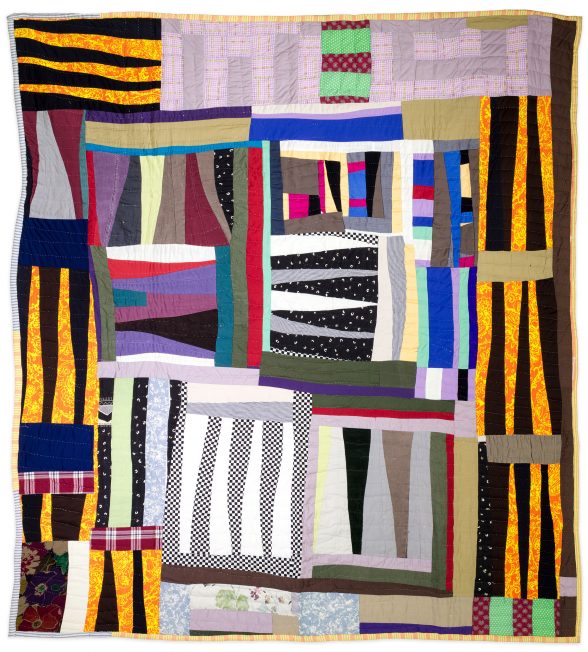 Mary Lee Bendolph, born 1935.  On display at Swarthmore College, Pennsylvania in 2018 from whose website this photo.  In the collection of Rubin Bendolph, Jr.

The celebrated quilters of Gee’s Bend, Boykin, Alabama live in one community of approximately 700 people: an isolated, impoverished and rural community, underserved commercially and by all levels of government.  It is surrounded on three sides by the Alabama River with one unfinished access road only.

A photo of the road in and out of Gee’s Bend which I believe was taken before 2008 by the Philadelphia artist, Frank Bramblett, 1947-2015.

Frank Bramblett was born in Cummings, Georgia and grew up in Wedowee, Alabama.  His life and art were marked by his fight for the civil rights and dignity of minority populations.

It was William Arnett who first came across the quilters of Gee’s Bend. Others followed.

Exhibitions of quilts made in Gee’s Bend were held first at the Fine Arts Museum in Houston, Texas and at the Whitney in New York, both in 2002.  Other exhibitions followed.

Their work has been studied, categorized, documented, filmed and is widely collected.   These quilts have an international audience now.

the contribution of textile handwork to the beauty of the world, to the solace and survival of human lives and the preservation of individual and communal history.

Lutisha Pettway, 1925-2001.  The Museum of Fine Arts, Houston from the website of the Souls Grown Deep Foundation.

The Foundation notes that Lutisha Pettway’s life was harder than most in her generation at Gee’s Bend  and in the South because she never married, inherited none of her father’s farmland and cared for a son with Down’s syndrome.

The entry of this work into mainstream museums is, obviously, one more step in the recognition of the ways of being, self-representation, world-views and artistic and artisanal skills of a minority population in the United States.

It is also a record of a people who have made an outsize contribution to the economic success of the United States for hundreds of years without compensation and without recognition.

Who have had to fight and are still fighting to prove in the belief that:

Grown Together in the Midst of the Foundation, 1994, cottonwood, steel, wire, concrete and PVC pipe.

A remembrance of the labour of African Americans,who came to work in the coal mines and iron blast furnaces of Birmingham, Alabama in the second half of the 19th century and the early 20th .  Which work made the city an economic success.

Metropolitan Museum of Art, NY from whose web site this photo is.  From the collection of the Souls Grown Deep Foundation.

The subject of the scolding was the woman’s belief that the man’s sexual demands were excessive.

Artist statement from the site of Souls Run Deep Foundation:

“Today is not the same as yesterday. The trials and the tribulations of today are harder than yesterday. It seems like the wire, the protective fence itself, kind of keeps everything well balanced. There are big crosses, little crosses, crosses that support and that hold the fence together.

“The fence can easily indicate ‘being behind it’ and ‘locked up.’ Prisoners are locked behind a fence.

“And then, also, we remember the nails, remember the harsh pain, one human body having so much pain. How can we not see these crosses?”

Minnie and her Friends, 1988, acrylic, tempera, pencil, on paper.

Georgia Speller, 1931-1988.  Metropolitan Museum of Art, NY and from its website. First collected by the Souls Grown Deep Foundation

Curatorial and academic work, which began with the quilts, has been taken up  on the mixed media works by, among others, the Metropolitan Museum of Art, NY.

Its 2018 catalogue speaks both to the Southern rural world and to contemporary art.

Further to be flushed out is the consanguinity between this work and the ritual and decorative arts of West Africa, the memory of its social structures also; whence this population was forced to come.

Likewise the connections between this work and the long history of subversion and revolt against the Powers that Have Always Been and Still Are in the Deep South.

Likewise the history of their lives and thinking by women artists and artisans.

to embrace this work as inside these traditions and not outside them.

The Enemy Amongst Us, 1995, commercial paint, pine needles, metal and nails on plywood.

Following the example, for instance, of  our traditions of ‘Western’ music, dance and poetry which

have sampled, absorbed, transformed and disseminated the work of

dancers and poets, musicians and composers

arose and arise from the same deep ground and history as the artists and artisans represented by the Souls Grown Deep Foundation.

The museum notes that the artist translated the texture of textiles into a new medium by coating copper plates with beeswax, then impressing the wax using fabric quilt maquettes made from used clothing. The texture of the clothing was then chemically etched into the plates.

or whether the time approaches for such an exercise to be seen as an essential step in the long proving in of the inalienable rights – specifically here of the pursuit of happiness – of this particular people.

Because we know that the glittering prizes of our art are for those who are given access by power and money to our museums and to the marketplace:

given to some populations and not to others, to men and far less to women.

The pursuit of the specific happiness of inclusion and recognition denied to ‘outsiders’, and the ‘self-taught’,

marginalized by a brutal history

which has refused to die.

This specific happiness to catch up to and overtake these fully-fledged members of the American nation, artists all.

We live in hope.

The artist pressed a small quilt on an etching plate to make this print.  It is a tribute to her mother.  The red represents her mother’s spirit; and the black white stand for keys for her mother’s singing while she quilted.  This artist is one of several quilters who have also made prints.

A recollection of the conditions on slave ships.

A recollection of  an African mask which refers both to the welder’s mask of the factory worker and the high status accorded metalworkers in West Africa.

Partial view of the quilts made by members of Gee’s Bend  first collected by the Souls Run Deep Foundation and now in the collection of the Metropolitan Museum of Art, NY, displayed in 2019

Out of Darkness, the Lord Gave Us Light, 2003, carpet, cloth, two-part epoxy putty, enamel and spray paint on canvas on wood, 2003.

Made from  trousers and shirt tops and scraps from a local shirt factory.

The End of November:  the Birds that Didn’t Learn How to Fly, 2007; quilt, wire, fabric and enamel on canvas on wood.

These are hanging blackbirds.  The museum explains that these are a signifier of Jim Crow, the label for state and local racial segregation laws and practices re-instituted after the end of the Civil War.

The evocative subtitle is meant to suggest the lynching and terror visited on blacks in the South.

Birds represent freedom in the artist’s symbolic universe, and the inability to fly here suggests the early denial or absence of liberty. Come November, the birds are unable to migrate to warmer weather and thus are left to die.