A primary concern of the artist was how to deal with what the appearances of things and of people hide.  She said: “There are things going on other than what you see.  What the eye sees is a kind of realism, but it isn’t everything.”

The curators of an exhibition of Honoré Sharrer’s paintings at the Pennsylvania Academy of The Fine Arts in Philadelphia (‘Subversion and Surrealism in the Art of Honoré Sharrer‘, Summer 2017) suggest that the artist’s work can be described more as ‘psychic realism’ than ‘hyperrealism’.

The artist uses a number of techniques to bend our eyes and our minds to fathoming out what is being hidden behind what we see.

(This, of course, being a vast subject which feeds into the way our societies, our social orders, our forms of domination and oppression and suppression are constructed).

There are unusual colours and colour combinations; there is the flatness of the images as though to emphasize a didactic rather than a representational purpose.  As subject matter, the artist presents stories  which we think we know:  myths, scriptural stories and nursery rhymes.  She makes use of press reports.

She distributes objects, all of which are domestic and familiar, in a haphazard way to make some of them vulnerable for breakage or spoilage.  Some of them are bent and some discarded. Mirrors, that instrument of our self-delusions, appear in two of these paintings.

Her dogs act as though they are cats: knowing, insouciant and autonomous.  Commenting on the goings-on.

Our curiosity is tweaked: we look and look to see if we are seeing completely what the artist shows and suggests.

The artist focusses on suffering in war, the status and freedom of women, and the complexities of the lives of  the working class and their unequal access to the cultural goodies.

The artist referred to her naked, satisfyingly-sized women as ‘liberated’.  It tends to be the clothed women, no matter how skimpy their clothing, who are not free, autonomous human beings.

One wonders what this humane and thoughtful artist would have done with our world today in which the virtual has become more real than reality; and very addictive. And what is hidden has been deliberately hidden by the artists and businesspeople  of the screen.

The virtual is not, of course,  not real.  It is real.  The construction of virtual time began, perhaps, with the invention of the steam engine (or is it with the Gutenberg Bible in 1455?) and is now continuing apace with our use of and dependence on screens of all kinds and sizes for all kinds of purposes.

Virtual reality has taken our psyches over.

And we can say – in spades –  about virtual reality what the artist said about reality:

“There are things going on other than what you see.  What the eye sees is a kind of realism, but it isn’t everything.”

Annunciation (self-portrait), and detail, 1938, oil on canvas.  In the collection of the artist’s family

The Musuem points to the study by the artist of the illusionism of Northern Renaissance masters and her self-portrait reflects the influence of Hans Memling’s (1433-40-1494, The Morgan Library  and Museum, NY) Portrait of a Man with a Pink, c. 1475.

Meat and Greek sculpture, and detail, 2003, oil on canvas, collection of the artist’s family.

The artist was interested in the French butchers of her time in Paris.  The sculpture she includes is based on the Greek work, Calf-Bearer, 560 BCE now in the Acropolis Museum, Athens.

Here the Museum suggests her interest in illustrating the difference between the commercial and poetic view of a common subject.

Loretta as Lady of Spain, and detail, 1972, oil on canvas.  Private collection

Lady of Spain was a song made popular by Eddie Fischer twenty years before this painting.   From the expression on her face, you do not know if Loretta entirely goes along with the sentiments of that song from a time whose values were being overturned in the late 1960s and throughout the 1970s until this day.

Lady in Bathtub, etching on off-white paper, no date.

Leda and the Folks, and detail, 1963, oil on canvas.  Collection of the artist’s family.

Two sources for this painting: the Greek myth of Leda and the swan:  Jupiter, transformed himself into a swan to seduce Leda.  Their child was Helen of Troy, the most beautiful woman in the world, the putative cause of a famous war.

The second source were reports about Elvis Presley and his parents, Vernon and Gladys.  Gladys was dominant, Vernon hen-pecked.  A working class and rural family, they struggled to accommodate the fame of their son.

Art Scene, oil on Masonite, 1979.  Collection of the artist’s family

Young Man Standing on the Fountain, and detail, 1988, oil on canvas.  Collection of the artist’s family.

Margery Daw, and detail, 1969, oil on canvas.  Collection of the artist’s family

This image relates to the Mother Goose rhyme in ‘See Saw Margery Daw’.  The rhyme is a chant of children shaming Margery Daw for her slovenliness and laziness.

The artist has Margery Daw very comfortable and liberated from anyone’s opinion of her.  With her dog on guard.

The Critic, 1979, charcoal and white ink on paper.  Collection of the artist’s family

Leda and the Dwarf, and detail, 1966, oil on canvas.  Memorial Art Gallery of the University of Rochester

Europa and the Bull, and detail, 1978, oil on canvas.  Danforth Art Museum

Nursery Rhyme, 1971, and detail, oil on canvas.  Collection of the artist’s family

This image is also related to a Mother Goose nursery rhyme:

‘Hey! diddle and diddle,  The cat and the fiddle, The cow jumped over the moon; The little dog laughed To see such sport, And the dish ran away with the spoon’.

Afternoon of a Satyr, and detail, 1989, oil on canvas.  Collection of the artist’s family

Workers and Paintings,  and detail, 1943, oil on composition board.  MOMA, New York (I could not get rid of the effect of light interference or the reflection of other paintings).

An ethnically diverse group of laborers holds well-known masterpieces.  The artist’s supported the Communist view that the society’s highest cultural achievements should belong to the working class.

Susannah and the Eldest, 1981, oil on canvas, Seattle Art Museum

Susannah was caught bathing by two lustful elders who threatened to accuse her of adultery if she did not sleep with them.  She refused and was sentenced to death.  Their scheme came out in cross-examination and they were executed in place of Susannah.

In the first painting, Susannah is very assured but not out of danger. Her eyes are open and she is alert. There is a knife pointing to her in the mid-front pane of the picture.    The skeleton is an intimation of what is to happen to the elders.

In the second painting, Susannah is asleep, relaxed and safe, in a bucolic setting even if a farmer turns to look at her in curiosity.

Spring and the Estes Brother, 1985. oil on canvas  Collection of Kathy Calderwood

Good Friday, and detail, 1970-75, oil on canvas.  Collection of Burch and Louise Craig

The indifference of he characters in this painting on a day commemorating the crucifixion of Jesus is thought to indicate American indifference to the suffering of the Vietnam war.

Reception, egg tempera and oil on panel, and detail, 1958.  Collection of the artist’s family

A Dream of Monticello, 1996, oil on canvas.  The Fralin Museum of Art at the University of Virginia

Archer and Unliberated Woman, 1987, oil on canvas.  Collection of the artist’s family

Meat, 1974, oil on canvas.  Collection of the artist’s family

Myth and Fred, 1987, oil on canvas.  Collection of Burch and Louise Craig

Two Dogs in a Still Life, and detail, 1997, oil on canvas.  Pennsylvania Academy of the Fine Arts, Philadelphia

Albertine Simonet and her two friends on the beach in the fictional town of Balbec.  Three of Marcel Proust’s characters from In Search of Lost Time, 1913.

Two dogs move from the tension of this family and the ominous woman dividing them.  As in other paintings, the roast chicken sits on the edge of the table, untouched and dangerously near being knocked off.  The chair is knocked over.  In the background is a line of windmills which could be witches and could be stakes ready for burning them.

The Play, and detail, 1997, oil on canvas.  Collection of the artist’s family.

The young man’s pose and the tomb are borrowed from The Resurrection completed by Piero della Francesca (1415-1492) in 1465 (below, Museo Civico, Sansepolcro, Tuscany, Italy).  The play depicted here is a passion play.  Christ has not yet been crucified and is still wearing the crown of thorns.  The Museum’s interpretation is that this painting is elevating the common man to Christ’s experience. 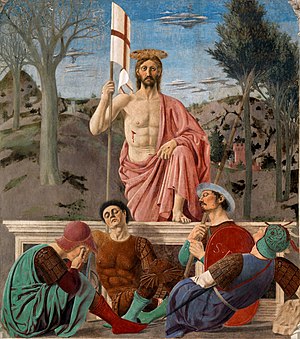 Afternoon on the Beach, and detail, 1990.  Collection of the artist’s family

Tribute to the American Working People, and detail, 1946-51, oil on composition board. (I could not get rid of the effect of light interference or the reflection of other paintings).  Smithsonian Museum of American Art.

The artist said:  “I have tried to paint this picture so that it would smack and smell of real life.  This meant to me that I had to paint people the way I found them, in hair curlers and run-over bedroom slippers, as well as the cleaned-up and planned-for moments such as when a farm woman showed me her display of jewel-like Mason jars, newly filled with pickled tomatoes, strawberries and corn…..Despite a thick crust of standardized and commercialized pretension, these people are for me the vital determining majority.”