It is estimated that there were upwards of 50 million bison (buffalo, bison bison, buffalo) in North America in 1700.

Bison herds declined over the next 300 years.

That the American military in the mid- and late 19th century, and individual traders killed bison in huge numbers is not contested.

The clearing of the Plains states of bison – a technique to push American Indian tribes to the margins of the continent – was, however, a very large coup de grâce.

for the increasingly effective hunting techniques used by American Indians after the introduction of the horse in the 1680s;

and for a certain degradation of the Plains environment because of drying.

Corcoran Collection of the National Gallery of Art, Washington, DC

A magnificent painting with a misleading name because it was not the American Indians who brought the bison to its last.

By 1900, there were only 2 dozen bison left in Yellowstone (defined historically as the 7,720 square miles in the headwaters of the Yellowstone and Madison rivers) where it is believed bison had existed for 10,000 years.

Today there are 500,000 bison occupying 1% of their former territory.  This revival resulted from the efforts of two distinct groups.

The first is commercial meat producers.

photo from the site of Yellowstone Park: credit NPS/Neal Herbert

A few thousand bison are wild.

These exist because of the efforts of a different group:

and then by some State governments, conservationist groups and some American Indian tribes.  These have often worked co-operatively to spread wild bison to state land, Federal reserves, and American Indian territory.

Hunting is not permitted on Federal lands.  American Indians hunt under license on their own land.

In some portions of the Plains states, there is considerable antagonism between commercial interests and groups seeking to increase the number and range of wild bison. This is for competition for pasture and for the fear of brucellosis, a disease endemic among bison which results in spontaneous abortion among cattle, deer, elk and other wild animals.

Such antagonism is mediated in the courts.

Bison, even if they are not today endangered, remain on the endangered list for reasons of historical and cultural sensitivity. 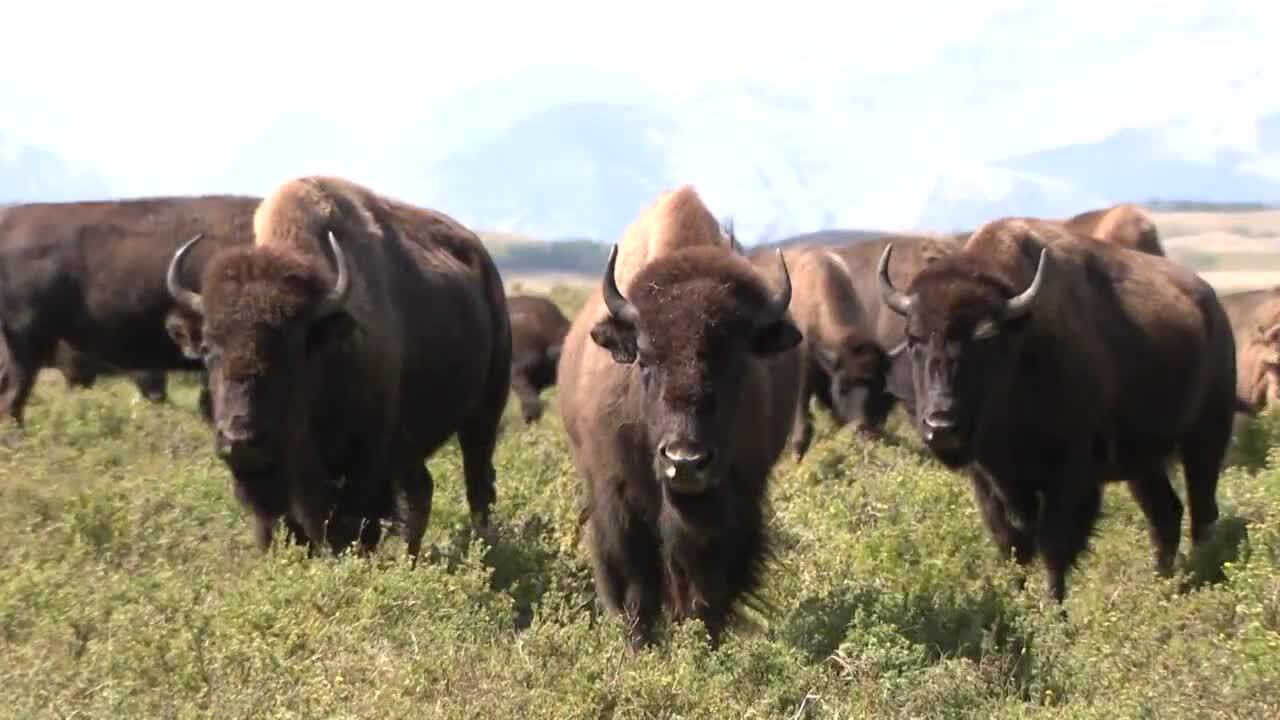 photo from the net of unknown date

Bison is a keystone species:   many other species, both plant and animal, depend upon it for survival.

This non-exhaustive description was reported by David Hage and Josephine Marcotty in 2014 on the website of the Alicia Patterson Foundation.

“Wherever they flourish, a large and complicated ecosystem grows up around them.

“Wild plovers and buffalo birds follow them, eating insects from the dust beneath their hooves and grubs from their droppings; prairie dogs build cities where the grazing bison have cropped the grass short.

Oxpeckers on the back of a buffalo.  They feed on ticks which bother bison. 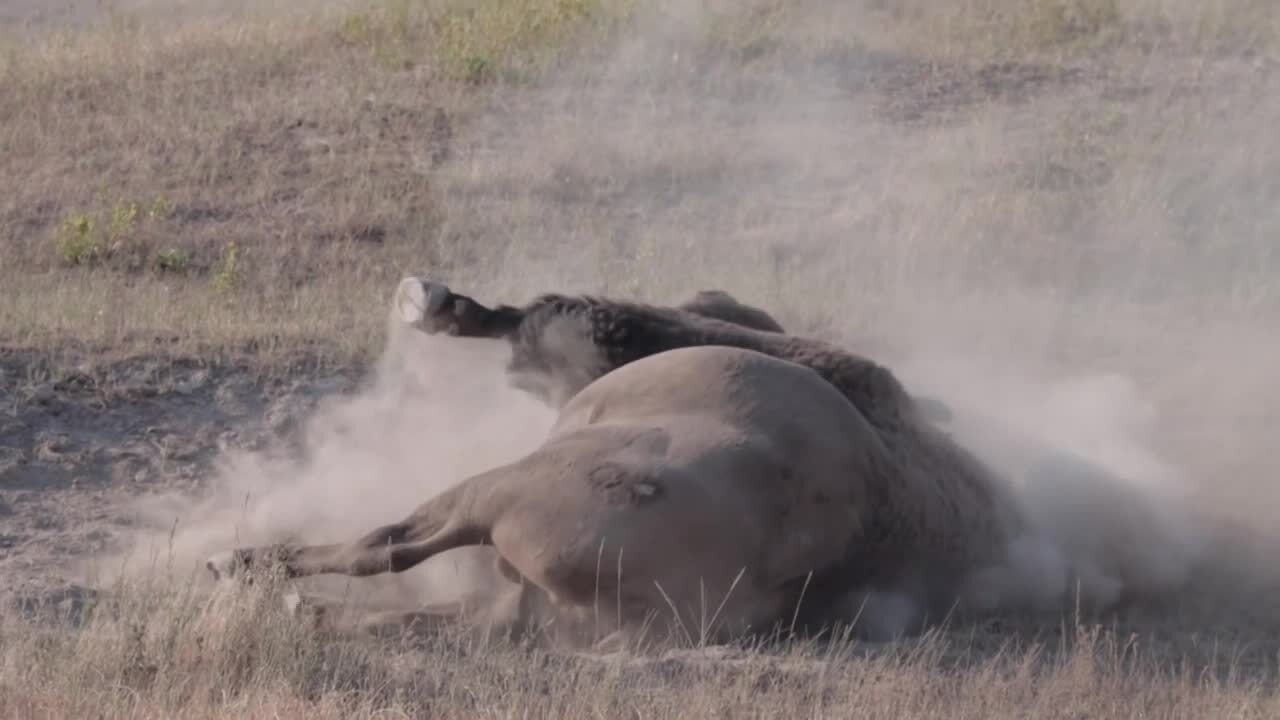 A wallowing buffalo.  Photo from the net.  Unknown date

“Where bison carve ‘wallows’ into the tough prairie turf – shallow depressions where they thrash about in the dust – rain collects and creates temporary watering holes for other animals and habitat for prairie amphibians. 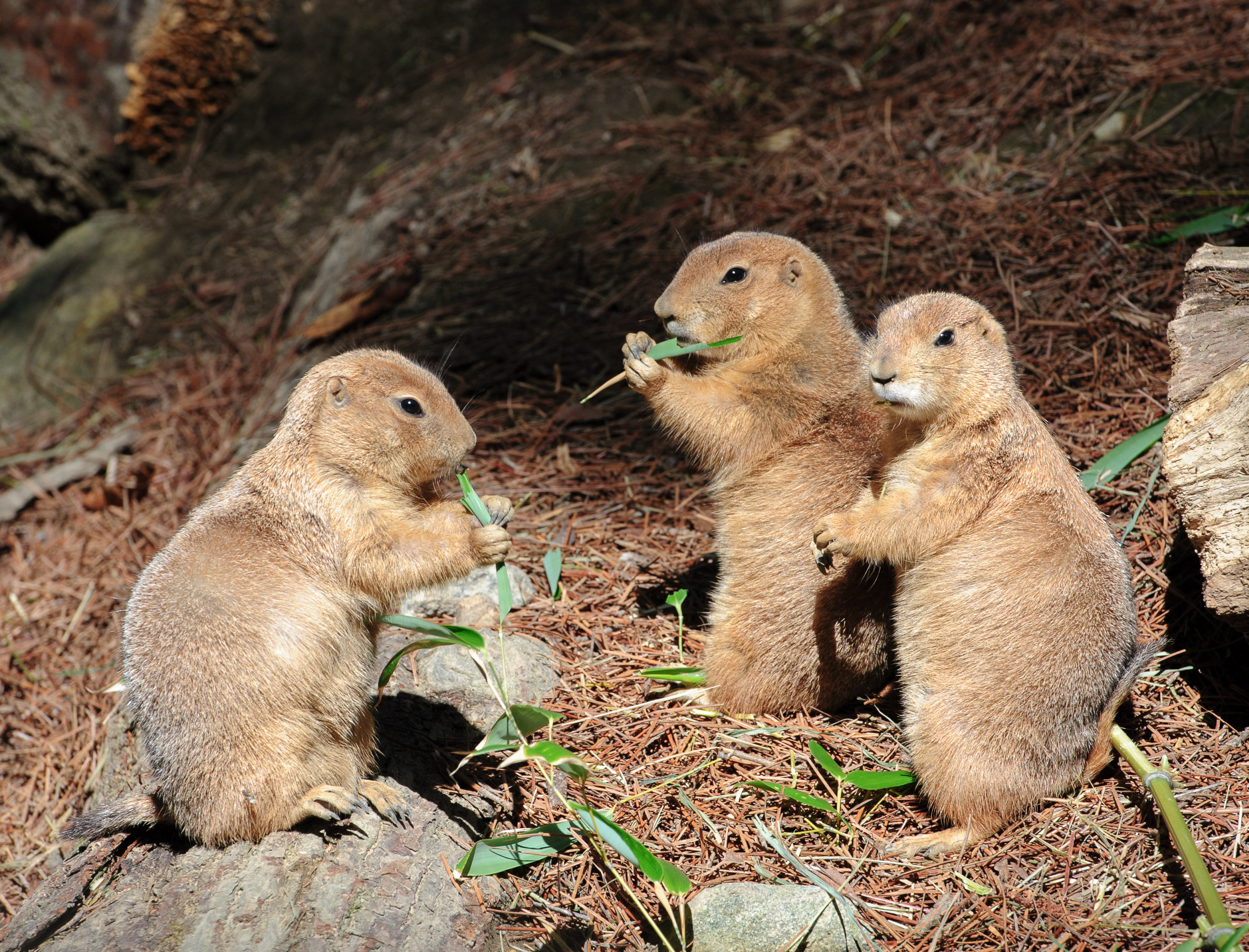 Prairie dogs (5 species of the genus Cynomys)  in a photo from the net. Unknown date

It is also a keystone species because it is heavily predated by mammals and birds of prey;

because its large complex of burrows, once abandoned, are used by other animal species, by birds and by the rattlesnake in winter hibernation;

and because of the salutary effect on grass ecology which results from its diet of grasses.

“And when a buffalo dies, its carcass provides days of nourishment for wolves, coyotes, hawks and other species that could never survive without a massive mammal that converts grass into meat.“

The buffalo and American Indians are intertwined spiritually, culturally and physically.

Their languages, divinities, myths, inter-tribal histories, songs, names, material culture, understanding of the flora and fauna of their environments; and sense of wellbeing, survival and hope

are enmeshed with their experience of this wild animal: the bison.

“The bison is our ancestor,” is a summary description of this relationship for a people for whom ancestors are an essential continuity binding the living to the past and future.

Photo from the net of unknown date

The Dakota (the 4-tribe federation of the Dakota) say that when the wild bison is back on their lands (it now is) their tribes will be healed.

Every interaction with the buffalo was and is preceded by thanks and blessing.

When the Canadian government returned 100 buffalo to the Blackfeet in 2016, descended from calves which the Blackfeet had sold them in the late 1890s, each part of the 400 mile reverse route into the United States was blessed before the animals were released onto the Montana plains.

A very rare white bison was born in 2012 on a commercial bison farm in Connecticut.

Not an albino and not from intermixed cattle bloodline.

10 members of the Sioux (Dakota) and Assiniboine tribes hunted buffalo on the Fort Peck Indian Reservation in Montana.  They permitted a journalist to accompany them.

Every stage of the hunt was marked by rituals of thanks.

Thanks for the involuntary sacrifice of the animal’s life so that a people may find its place in a particular land.

Robert White, one of the hunters, lays his hand on the buffalo’s head shortly after it was shot.

Photo by Tallyr Irvine for the NY Times, November 2020

When the buffalo was butchered, there were prayers and blessing.

photo of bison in winter in Yellowstone Park.  Unknown date

Thanks for the involuntary sacrifice of the animal’s life so that a people could find its place – for 1000 years – in a particular land.