Representation of of women expanded at the Renaissance from portraits of the Virgin Mary, of women religious and of high-born women to include women in classical myth and legend.

It was the early-to-mid nineteenth century before  ‘ordinary’ women came into the frame going about their ‘ordinary’ lives, a move to which the Impressionists, the Nabis and others gave momentum.

Analysis in the late 20th century of the unrealistic and freighted depiction of non-white women in European painting is one of  the sources of  Colonial studies which continue apace.

Here some secular paintings of real  women, and women in myth and in genre paintings.

Menen Asfaw, 1889-1962, Ethiopian.  Wife of Haile Selassie I, by whom she had three sons and three daughters; granddaughter of King Mikael of Wollo  Last empress of Ethiopia.

Undated photo from the web.

A pious woman of very great kindness.  Affianced three times and married twice, her life illustrates the institution in which women are the means by which kin groups seal their relationship with each other.

Worldwide system since time immemorial, this defines the function of a woman’s life to child-bearing alone and sharply limits the development and scope of a woman’s agency years before she can reach her intellectual and emotional maturity.

The institution is extant still and one aspect of it continues in ‘advanced’ societies in which the right to abortion remains a contested subject.

Mask of a Woman with a Large Coil of Plaited Hair, plaster, plaint, glass-inlaid eyes; reign of the Emperor Hadrian, 117-138.  Metropolitan Museum of Art, NY

Portrait of a Woman, tempera on wood, thought to be 1430s.

Portrait of a Woman, no date given, tempera on wood.

Thought to have been commissioned by a platonic admirer of the lady whose reputation was that she was as learned as she was beautiful.

Known to be closely related to a fresco, since destroyed, in a church in Bologna of the Crucifixion.

Tintoretto, 1518-1594, Venice, Italy.  Loaned by Queen Elizabeth II to an exhibition in 2019 at the National Gallery, Washington DC

A preparatory study of a rarely represented pose: a woman taken aback by the expression of love from her children.

The frame is surmounted by a ‘pelican of piety’, a centuries-old emblem of the self-sacrifice and love of women for their children.

A ‘pelican of piety’  showing a pelican wounding herself in order to feed her brood; embroidered in silk on silk on a bedcover, Britain or France, 1800’s.

Jean-Honoré Fragonard, 1732-1806, French.  Metropolitan Museum of Art, NY reminds that this is a genre painting and not a portrait.

Elisabeth Louise Vigee Le Brun, 1755-1842, on long-term loan from the Kimbell Museum of Art to the National Gallery of Art, DC

A painting so different from the artist’s work that it took 100 years and a thorough cleaning to reveal authorship.

Odalisque with Slave and details, 1842, oil on canvas.

Jean-Francois Millet, 1814-1875, French.  The Walters Art Museum, Baltimore from whose website this is

The Goat Girl, c. 1868, pastel on paper (with light interference)

One of a number of sketches made during a trip to the Auvergne region of France.

Jean-Francois Millet, 1814-1875, French. The Frick Collection, NY from whose website this photo

Lily Martin Spencer, 1822-1902, American. Memorial Art Gallery of the University of Rochester exhibited in 2015 at the Philadelphia Art Museum.

The last of this artist’s portraits, the subject died of tuberculosis not long after it was painted.

This is a surrogate, often cast from the body (parts) of the worshipper, which served as offerings of gratitude or as prayers for divine intervention.  They were deposited in churches and were periodically condemned by the Roman Catholic church as a superstitious remnant.  This example is from Bari in Italy, late 19th century.

On exhibit at the Metropolitan Museum, NY in 2018

An actress who became the artist’s common-law wife, mother of his ten children, raised under a different name from his.

Portrait of the Artist, 1878, watercolour, gouache on wove paper laid down on buff coloured wood-pulp paper.

One of two self-portraits, this was made a year after Edgar Degas invited Cassatt to exhibit with the Impressionists

Disparaged for the boldness of the sitter’s stance and for her scandalous reputation, the artist sold this portrait to the Met in 1916.

The artist painted five portraits of the sitter, the wife of his friend, the postmaster of Arles. He offered her whichever she wanted and when she picked this one, he said she had picked the best.

This painting was presented in the first Salon of the Rosicrucians.

It is about the harsh conditions in and unequal distribution of the profits of mining whose output was fueling the economic growth represented by the factories in the background.  The woman on the horse is Lady Liberty.

Her name is not known.  Her nickname was La Casque d’Or,  She is sitting in the garden of the artist’s neighbour in Montmartre

Amelia van Buren, c. 1893-1897, platinum print taken by a member of the circle of Thomas Eakins. ?Philadelphia Museum of Art

The largest of five paintings together called The Album after the focus of this painting.  The five were commissioned by in 1894-95 by Thadée and Misia Natanson for their Paris apartment which also served as an office for La Revue Blanche, a short lived but influential journal of the arts originated by Thadée Natanson.

Stage hands are bringing down the curtain on a magazine, L’Estampe Originiale (1893-95), on this last edition to be printed.

Influential intellectual, socialist, political and anti-war activist for the welfare and rights of the working class, she was imprisoned and tortured for her work and killed, extrajudicially, in prison with Karl Liebknecht, her colleague and comrade in arms.

150 years this year since she was born.

An unusually gracious portrait by an artist whose portraiture style was warts and all. 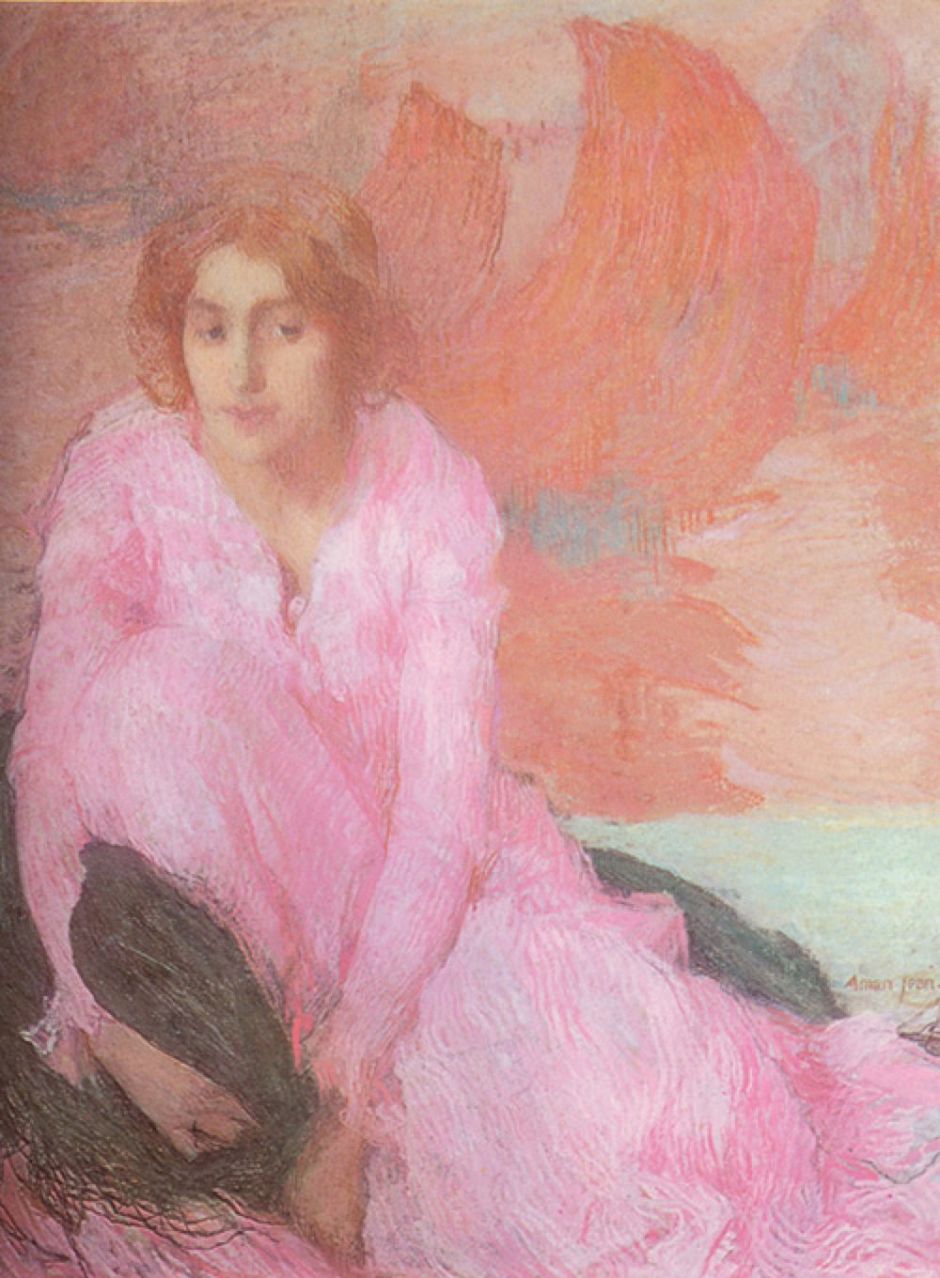