With the practice of needlepoint learned in my English childhood, I have been threading together some of my continents.

These works have been companions: enforcers of a long road of pleasurable quiet.

A copy in wool on cotton scrim  by the owner of this  blog (1980-1987) after a painting of priests with their incense censers in the church of Abune Mikael in Qoraro, Tigrai, Ethiopia).

An approximate copy in wool on cotton scrim  by the owner of this  blog (2002-2006) of a magnificent door curtain designed by John Henry Dearle, the head of William Morris’ studio after Morris died in 1898.

The original was embroidered in silk on silk and its background was a mass of flowers too difficult for me to reproduce.

Here the flower is growing in the cement, concrete and asphalt of the world.

I completed this work in Addis Ababa.  There the light, at 7000 feet, is wonderful.

At the top  left is the Yeha altar of the Bronze Age Temple of the Moon, thought to be a Sabean structure dating from 700 BCE in Adwa, northern Ethiopia.

After a sculpture over the lintel of a doorway, The Temptation of Eve, Giselbertus, originally at Autun Cathedral, Normandy, France c.1130 CE.

Needlepoint in wool on cotton scrim in 2008 by the owner of this blog.

Silk, 1600s, made from the muga silk worm which spins a shiny, golden thread. Native to north-east India. Collection of Winterthur, Delaware

Detail of a shawl made of white work  embroidery; cotton on cotton; worn by a member of the Ten Eyck family, New York, 1800-1825.

The museum notes that this kind of much in-demand, generally very poorly paid work was outsourced to women working at home in India, Switzerland, Britain, France, Italy, Germany and in North America during the 1700s and early 1800s.

Easy chair covered with flame stitch needlepoint believed to have been done in the US between 1720 and 1770.  The chair was made of walnut, maple, wool and linen and its maker is not known.

Scenes of a wall covering – Chinoise Scene – of silk, paint and cotton, hands and face of each character painted; embroidered and appliqued made between 1780 and 1830.  Probably French and mounted originally as panels on screens.

Design  of an Ecclesiastical embroidery attributed to Walter Crane , 1845-1915, British, for the Church of the Ark of the Covenant in London.

Philadelphia Art Museum of Art from whose website this photo.

Details of the ecclesiastical embroidery above.  Light interference.  I do not know who executed this embroidery.  Philadelphia Art Museum

Memories of a  Summer in the White Mountains, 1917, described by the museum as a ‘tapestry’.

The Collects for Sundays and Holy Days, 1928, embroidered velvet and silk.

Crocheted bedcover made in cotton c. 1950 in the Philadelphia area. I don’t know who the creator was.

This represents the crucifixion of Jesus and was controversial when first displayed.  On exhibit at the Philadelphia Museum of Art in 2019/2020

Woman Crocheting.  Seen in a vintage shop in Philadelphia in 2018.  Unknown provenance.

The wool is hand-spun and naturally dyed in earth colours.  Pockets down the front recall shaman’s pockets for magical herbs.

The Albino, 1972, re-installed by the artist in 1994 as All That Rises Must Converge/Black.  Bronze with black patina, wool and other fibers.

An Interior with Annette Sewing, 1954, graphite

The museum notes that this was made with the co-operation of the artist’s wife at the time, Patty Mucha.  She sewed the forms in vinyl.   Richard Artschwager sculpted the toothpick out of wood.

This was one of several common and garden consumer items which the artist created in large, sometimes giant form.

The museum says that this is the artist challenging the presumed objectivity of Minimalism with the idea of Anti-form in which he tries to show that the specific bodies of artists and viewers inform their approach to an art work.  In this phase, the artist incorporated felt, rubber and wire in his work.

Catherine Jansen, American born 1950. Loaned to the Pennsylvania Academy of the Fine Arts in 2020.

The museum notes that this, commissioned by his friend, Salvador Dali, was one of seven mystical garments commissioned for the grand opening of the Dali Theater-Museum in Figueres, Spain.  This garment represented the symbolism and meaning of colour.

Robert Rauschenberg, 1925-2008.  The artist used Indian silk or satin in a series of works he made after his 1975 residency in Ahmedabad, India.  They hang and move like sails or flags.  Metropolitan Museum of Art, NY

The museum notes that the artist revived macrame knotting found in the Arab tradition which had been long dormant.

A Fantasy Meeting of Santa Claus with Big Julie and Tyrone at McDonalds, 1979, resist-dyed cotton.

The museum notes that Charlie Logan, a poor man and ill in later life, spent time on the streets of Alton, IL wearing clothing which he had embroidered with themes both from African American folklore and Haitian beaded costumes.

More Love Hours Than Can Ever Be Repaid and the Wages of Sin, 1987, stuffed toys, fabric, and afghans with dried corn and waxed candles on wood and metal base.

Jean Williams Cacicedo, American born 1948.  The artist’s memorial for her father: the 23rd Psalm makes up its back and the whole a ‘vessel for housing the soul of the departed.’

Loaned by the ISelf Collection to the Metropolitan Museum of Art, spring/summer 2018

Tambour – which produces a tiny chain stitch –  stitched  with an awl in silk thread on a piece of hand-blocked silk by a member of Self-Employed Women’s Association (SEWA), Ahmedabad, India, 2010

The vertical warp thread only is exposed at the center.

The artist is a member of the Seneca nation which is part of a confederacy, with the Mohawk and four others.

This work is her comment on the large contribution made by Mohawk ironworkers to the building of New York skyscrapers. And the use of blankets of this type at birth and death.

Trying to find our spot off in that light, light off in that spot, 2014, mercerized cotton stretched over cotton.

The museum’s commentary is that these are Coogi-brand sweaters made famous in the 1980’s and 1990’s by popular African American TV personalities and musicians.  The work’s title comes from song lyics by the rap duo Outkast and is a commentary on the large-scale Abstract Expressionist gestural painting of the mid-1990s.

Installed at the Renwick Museum, the craft museum of the Smithsonian Museum of American Art,  in 2015 to celebrate its renovation in 2015. The theme was ‘wonder’.

Colored threads were hung floor to ceiling in a helix-like formation, arched in the middle so that you could walk through, look up, look out to the light streaming through an open door and through windows.

Nikki Lau. No other information.

On display at the 2018 Clay Studio juried show, Philadelphia.  Honouring the artist’s maternal grandmother who worked in Chinatown, San Francisco in the garment industry; and her mother who works in the US food industry.

An anonymous knitting collective placed these on the fencing of a south Philadelphia playground, 2019

A Lost Key, 2019, hand embroidery on cotton and wood frame.

A representation of the loss of culture (language, values, practices, etc.) from one generation to the next when exile has intervened.

Jordan Nassar, American born 1985.  Palestinian on his father’s side, Polish-American on his mother’s, Nassar uses a Palestinian cross-stitch to create works which he works with Palestinian women.

Rebecca Segall, 2020 Certificate from the Pennsylvania Academy of the Fine Arts, Philadelphia (no other information). 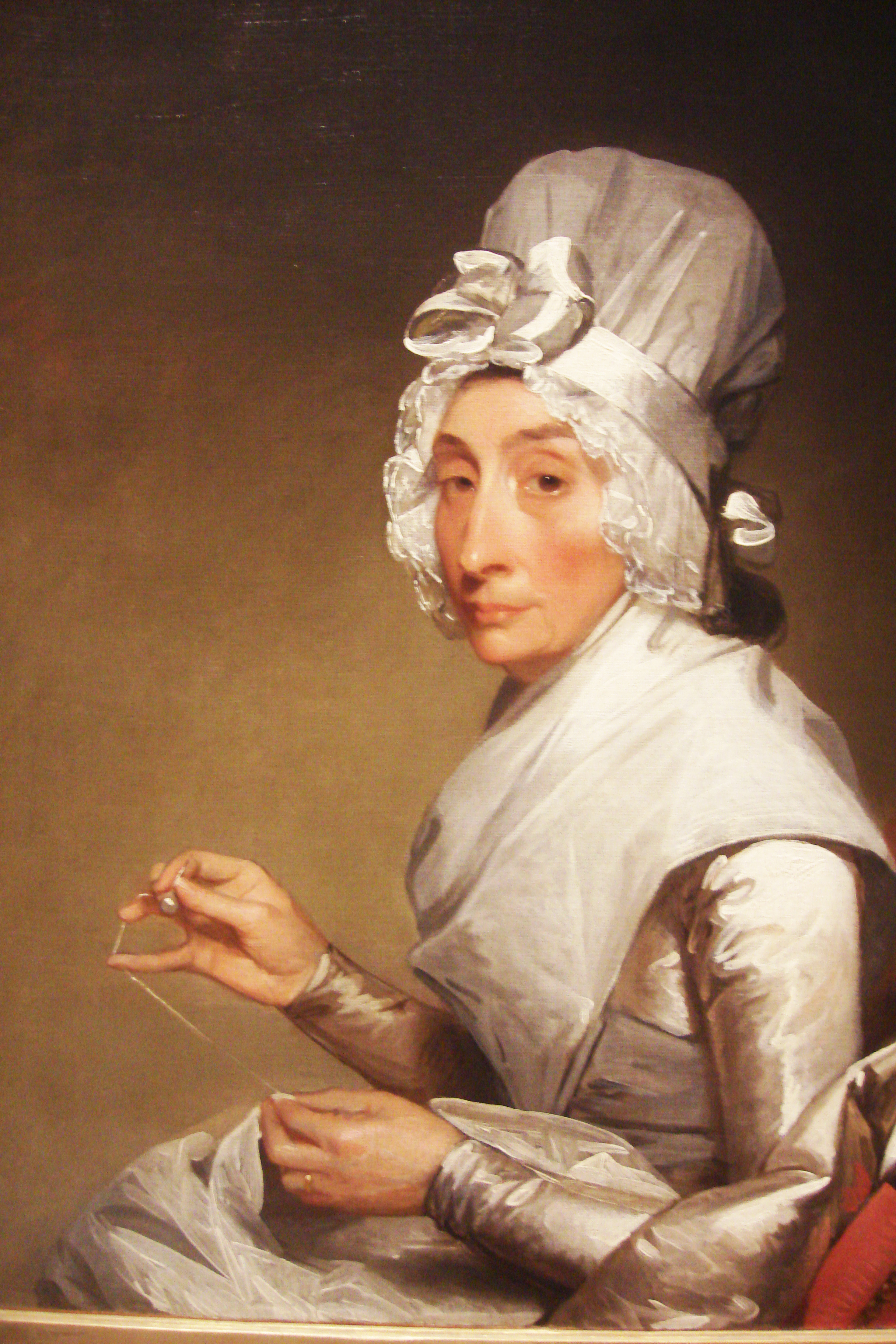