All public schools and many businesses have been closed since Wednesday because of the restriction on traffic into and in the city center.   Many police on the street.  Also young men in army uniform.  Warm weather with a breeze.

People are waiting for Pope Francis to arrive.  Everyone is watching.

Vast amounts of construction have been completed in small time in the center of the city.

Continuous city street cleaning is going on. Important buildings and St. Joan of Arc on the Parkway gleam.

Public sculpture of little brass men cleaning up is in a NY Metro station (cannot recall which).

Unaccustomed flags flying at and around Independence Hall.  And General Washington finds himself canopied.

General Washington in company under his new canopy at Independence Hall on September 26.

The pagans are dancing themselves out of the picture.  And trying to fly out of the frame.  For the duration.

The devout are displaying the signs of their faith.

Lego cross by someone who lives on Girard Avenue and Masters Street.

The New Agers their philosophy:

Jokes circulating about the lachrymose Roman Catholic Republican Speaker of the House of Representatives who resigned all his powers and positions one day after the Pope spoke at Congress before which he met privately with the Speaker.

And the nerve of Comcast with their sky-high rates for cable and internet service and their low-low levels of customer satisfaction intimating that we are the architects of our own unhappiness!

And eyebrows raised to the heavens at the expected selling of the pontifical Host.

Prep material for lay volunteers at the pontifical mass on Sunday asks them to be alert to communicants who are not swallowing the Host:  the Church believes that some people intend to sell the Host later.

But then again, many are those who have served Mammon off the Pope’s back  for 2000 years. 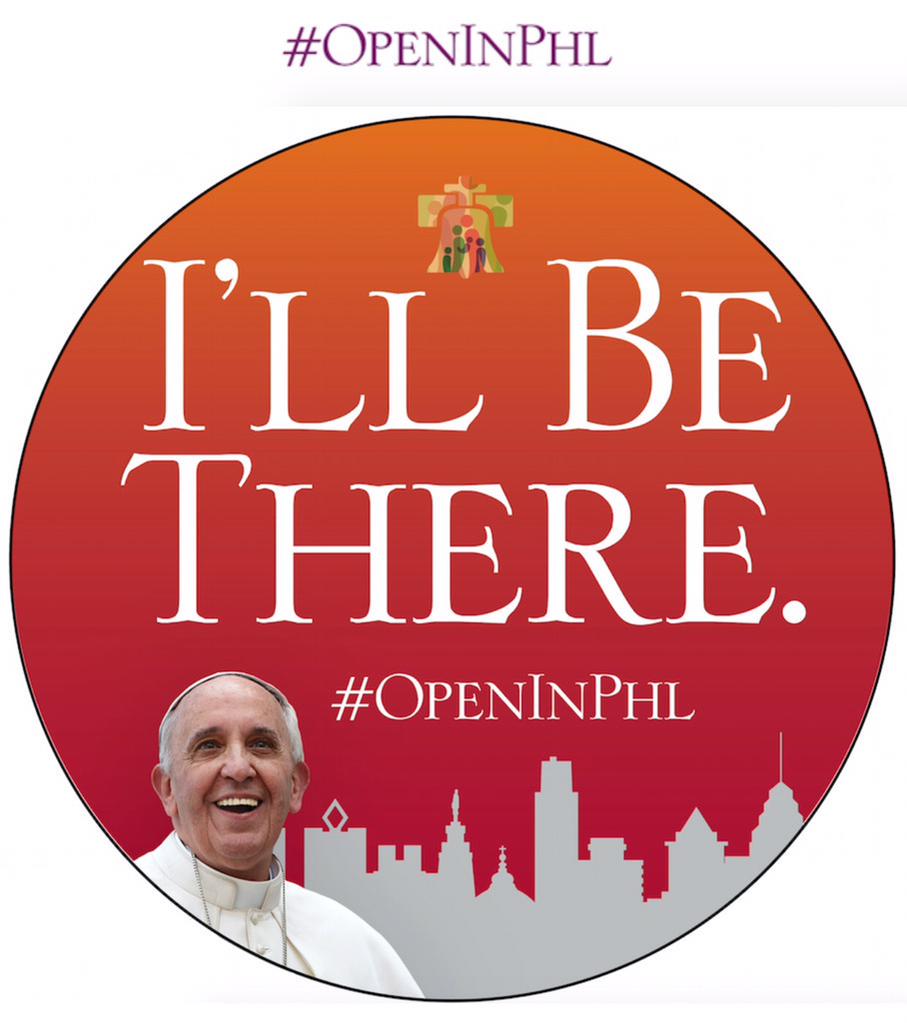 On with the preparations!

Old St. Joseph (1733) completely occluded by Jesuit custom in a courtyard off Willings Alley in Society Hill  is open every day now all day.  Floating in secret light.  St. Francis Xavier is fronted by a beautifully wrought bald eagle.

It is the oldest Catholic church in the city and was hidden also because in 1733 no Roman Catholic churches were permitted in British territory.  Except, of course, this ban violated William Penn’s charter for the city.

Lions and ladies  festooned with flowers.

And statues of the Madonna everywhere are carrying flowers, as here where St. Charles Borromeo seminary was founded in 1834.  The site also marks the first burial ground for Roman Catholics.  5th Street in Society Hill.

Stained glass girl with flower wreath was made by Tiffany Studios, NY, c. 1900.

People are deciding on balconies for best viewing:

I-Phones too with the special button in the shape of the cross made for purpose:

Gift to the writer of this blog of a portable phone made of ebony and birch by Carl Weissinger.

All waiting and watching and hoping to capture the sanctity of a pope in the city.

The featured image is of a stained, painted glass depicting the prayers of the first Congress meeting in Philadelphia in 1774 on the verge of revolutionary war.  Curtis Building, 6th and Walnut, Philadelphia.

One thought on “Habemus Papam Philadelphia”